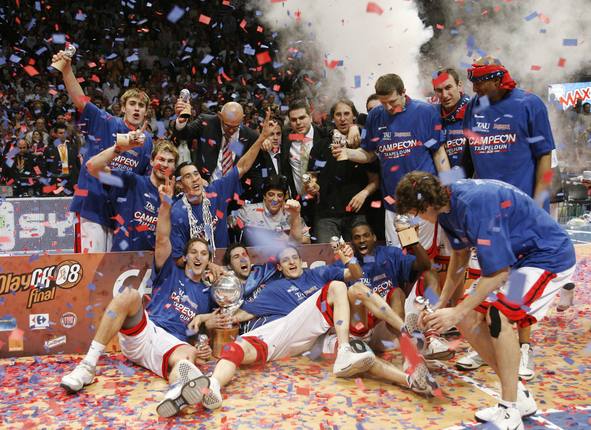 A Night With The Next Ginobili


Matias Nocedal
Photo: Jose Montes/www.elcorreodigital.com
Manu Ginobili's success in the NBA has spawned the kind of fame normally reserved for soccer's elite, but now basketball is becoming a countrywide passion, and Ginobili is being heralded as the Michael Jordan of Argentina.

In 2002, when Argentina upset the U.S. Olympic team in Athens Greece, Manu, and countrymen Andres Nocioni -- who have now become poster boys of Argentinean basketball -- were not well known even throughout their own country. But in the last four years, the fame of basketball players and the popularity of the sport in Argentina have reached astounding heights.

As the search for the next Manu Ginobili heats up in Argentina the eyes of scouts have leveled on the thin frame of 16-year-old point guard prospect Matias Nocedal, of Argentino Castelar. Nocedal will participate in the 2006 Adidas Superstar Camp in Sao Paulo Brazil, where he will be competing against the top talent in his age group from around Latin America. Matias won the camp MVP and slam-dunk contest in 2005, and many are looking forward to seeing his improvement this July. NBAdraft.net got a sneak preview of Nocedal’s progress in June.

It has always been difficult to gauge Mati’s skill level because he plays for a very small sports club outside of the city, and his competition is not always the best. I saw him one of two nights. In the first, he was guarding a crafty 35-year-old with a beer gut.

Also, just to demonstrate one example of how small his club is, the court he plays on is equivalent to the one I played on in eighth grade. It’s cut short length and width-wise, but along the sidelines there’s no room to shoot a three pointer because the out-of-bounds line is about four inches behind the three point line.

The gym holds about 150 people, and the stands are very close to the court. It was a great intimate atmosphere for the second nights game, which hosted a team of American players from division 2 Colleges and Universities in North Carolina and Tennessee, who were brought here by a Baptist church in Florida that comes to Argentina annually to spread their faith... and play basketball.

The energy in the gym was very tense as the game started. There were many English speakers in attendance who had come with the church, and all the locals were a bit awestruck by having American basketball players in their gym, 4 or 5 of which were giving the crowd a dunk show during warm-up layup drills.

It would have been worth the price of admission if only to see the reactions of the American players as they were greeted by hand shakes and kisses on the cheek (the common greeting in South America) from the Argentinean team before the opening tip-off. I have a mental image of one gringo pulling his face away in disgust while trying to figure out why he was being kissed by a man. The fact that they were all devout Christians made the cultural awkwardness and homophobic knee-jerk reactions that much more entertaining.


Matias Nocedal
Photo: Joshua Motenko
The Americans proved to be exactly the type of competition I was looking forward to in order to see what this kid Nocedal could do with a basketball.

I interviewed him in Spanish for about 45 minutes before I saw him play, and found him to be an extremely nice kid. Soft-spoken and polite, it was easy to tell by his personality that he just recently turned 16 years old. However, when he stepped on the basketball court, the person that I met was nowhere to be found.

Mati proved to be the fastest, quickest, and most athletic player on the court. He was able to pretty much do whatever he wanted to, and the game was close the whole way, with the Americans having a 4 to 9 point lead most of the game.

I was at mid court sitting next to players from the Argentino Castelar´s 13-14 year old basketball team, shouting to the Americans in English and to the Argentinean team in Spanish throughout the game. Half time came and went with a presentation by the church.

As the second half of the game unfolded, the crowd (lead by the youths sitting next to me) continued to demonstrate home court advantage with their loud chants, like the familiar "Oley.... Oley, Oley, Oley!"

It was great to be a member of the local atmosphere and cheer against my home country – rooting for Nocedal as to impress me against the tough competition. The Argentineans were down by 11 points with 7 minutes to go, and were able to play great defense and keep the Americans to only 5 points over the next five minutes, cutting the lead down to about 4 or 5 points.

Matias was trying to put his team on his shoulders and carry them to victory. He got to the free throw line often, but missed a couple three pointers during this stretch of play. However, in the final two minutes, he put on a show for me.


Matias Nocedal
Photo: Joshua Motenko
The defense was so focused on him and his ability to attack the basket with his quick first step, that he was able to use this to his advantage, driving into the lane a couple times drawing three defenders, only to find a cutting teammate open under the basket for a lay-up.

They were great passes that took mature recognition, vision and decision-making ability. His next trip down the court, he dribbled down the middle with time ticking away, made a cross over dribble to his left as he passed mid court, and took a long, long three-pointer with great confidence that reminded of Gilbert Arenas. He knew it was going in when the ball left his fingertips.

The Americans then took the ball down the court quickly and passed to their big man who was more open than he should have been (since as he was their best player) near the basket.

In seeing this, the Argentinean big men both leaped at him to block his shot, but he gave a deceptive shot fake, and as the defending players came crashing down on him (fouling him), he somehow managed to throw up a shot that spun in off the glass. He made his free throw, and kept the lead for the Americans. The energy in the gym was fantastically stressful, despite the billing as a “friendly game”.

The Argentineans came down the court but the American point guard stole a pass. He raced down the court as I watched Nocedal´s reaction, hesitating for a split second, and then following in pursuit. The American shot the ball up high for his lay-up as Matias sprung off the floor.

As the ball was at its peak height about to drip through the hoop, Matias swatted it away from the rim into the crowd. It was called goaltending and the basket counted, but you could tell that Matias got the effect he wanted and everyone gave a big smile at his leaping demonstration.

The Americans were up by 7 points with about 50 seconds remaining, so the game was basically over. Nocedal took the ball out of bounds, and ran up the court with his team. He passed to a big guy, who was defended tightly. The Argentinean made a couple slow, ugly moves to try to get open to shoot, and he was fouled as he threw up a prayer of a three-point shot... which to the surprise of everyone in the gym went in!

The whole gymnasium erupted in pandemonium as the Argentineans had a chance at a four-point play. Jesus was obviously with us all that night. The player made his free throw, and the Americans were immediately fouled when they took the ball out of bounds.

They made both free throws, and with about 10 seconds left, Matias ran up the court and took another long three pointer... that missed. The Americans ran out the clock and the game was over, but with such an exciting finish to a friendly game, no one on the Argentinean side was upset to lose.

In addition, Matias Nocedal collected another admirer, showing that he can rise to the challenge in a truly competitive atmosphere.

Motenko: Do you speak English too?

Nocedal: Yeah, I can speak a little. My mother is a teacher.

Motenko: Good, let´s begin. Matias, how old were you when you started playing basketball?

Motenko: Does anyone else in your family play basketball, or other sports?

Nocedal: Yes, I have two younger sisters and one of them plays basketball... but she is only 5 years old (smiles). My mother and father both played volleyball, but not anymore. They didn´t play professionally in Argentina, but they were pretty good.

Motenko: Do you play any other sports?

Motenko: How come you´re not playing with the Argentine under 18 National Team?

Nocedal: Yes, but they don´t play until October.

Motenko: Who is your favorite NBA player? Do you try to play like them every?

Nocedal: I like Chauncy (Billups), (Dwayne) Wade, Bruce Bowen. I do try to play like them sometimes. I try to imitate the characteristics of their game that they do well, like dribbling for Chauncy, or going to the basket like Wade. And obviously for Bowen, it´s defense.

Motenko: Who is your favorite Argentinean player?

Motenko: Who is your role model in your life, someone you respect and want to be like as you grow older?

Nocedal: My father. I have watched him do many things, and he has taught me a lot about life. Yeah, I would say my mother and father.

Motenko: On the basketball court, who is your toughest individual match-up? Who is difficult to play against?

Nocedal: Every aspect of my game needs work. Nothing is sufficient right now. But if I need to answer, I would say my shot.

Motenko: What aspects of your game have you improved from last year?

Nocedal: My dribbling has improved. My defense. And my physique, my body.

Motenko: Are you currently on a weight lifting program?

Nocedal: Yes, I lift about three times per week.

Motenko: What aspects of your game still need work?

Nocedal: Strength. My left hand. Dribbling always is something I work on, and passing.

Motenko: You recently signed a professional contract with Tau Ceramica in Spain, when will you go over there to play?

Motenko: What advice have you gotten about playing there, and living there?

Nocedal: I have been to Spain before, so I know what to expect about the place. I went about five or six times. There will be a lot of different things, however… The language,... I think I will miss my family. But that´s all part of the game.

Motenko: Is the NBA one of your primary objectives for your future?

Nocedal: No. There are many steps to take before then. If I keep improving, and if I am close, then I think I will want to play. But right now, I´m not thinking about it.