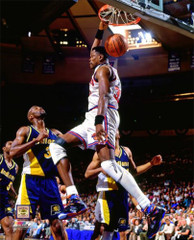 The NBA Draft Combine participants list was released. Of note for Knick fans: LaMelo Ball, Killian Hayes, Tyrese Haliburton, Kira Lewis Jr and Isaac Okoro will be present, whereas Devin Vassell, Cole Anthony and a few other notables will not

Over the weekend, Marc Berman noted that the Knicks have “strongly considered” Isaac Okoro with the 8th pick in the draft. It’s the latest crumb we’ve gotten from the beat as fans try to decipher what the Knicks are thinking heading into draft night, in addition to their well documented love affair with LaMelo Ball and Ian Begley’s earlier report that Devin Vassell “has some fans” within MSG.

For what it’s worth, I’ve heard a lot of names tossed around, all with varying levels of interest. Putting everything together, here’s the best summary of where I think the Knicks are at right now (and please, take all of this with several grains of salt):

If Obi Toppin is available at eight, I think he will be the pick. One league source I spoke to feels that if he’s there, he is “100%” going to be the choice, but it also seems like he will be off the board, just reading the tea leaves.

I have no idea how Killian Hayes being available at eight would impact this. I was told by someone a few months back that the Knicks liked Hayes, but haven’t heard anything in regard to their level of interest - for better or for worse - recently. Maybe they’re sure he’ll be gone, or maybe they have no interest. I genuinely have no clue. Sorry.

I think if Toppin is off the board, it will come down to Tyrese Halliburton, Devin Vassell or Isaac Okoro. I continue to believe Vassell would get the nod, but that’s only because I’m surest about the fact that they have interest in him, as opposed to their level of interest. But they like him, as they should.

I’ve also been told by multiple sources that they have interest in both Cole Anthony and Kira Lewis Jr., but my impression is that these two may be in a tier down at this point. Patrick Williams is someone else they have done their homework on, according to a source.

I expect more info to seep out over the coming weeks, and some or all of it my be complete smoke. This draft is so all over the place that nothing would shock me (although if they traded up for Ball at this point, I’d be more than a bit surprised).

Williams was ranked 28th last year, higher only than Isaac Okoro (40th) among players currently being talked about for the lottery. Unlike Okoro though, who started every game as Auburn’s de facto top dog, Williams was a sixth man, and much more cog than engine.

Vassell, meanwhile, was barely in the nation’s top 200 ranked players when he committed to FSU (and according to what Charlston Young - the man who recruited him to Florida State - told me on this week’s upcoming KFS Pod, even that ranking was generous).

Six weeks later he was at 37, then up to 16 a month later, and then up to 10 two weeks after the shut down, which is roughly where he’s remained. It is as meteoric a rise as we have seen any player make over the last 12 months, and on par with anything that’s been pulled off by a prospect in some time.

The big question about Vassell (and to a lesser extent Williams, who was a borderline first round prospect for much of the season as well) is whether the Rise of the Seminoles has more to do with the players themselves or the draft as a whole. The answer is a little bit of both. 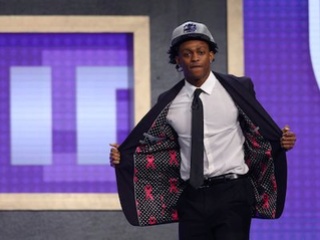 Jerami Grant is expected to opt out of his player option, league sources told Mike Singer of The Denver Post.

Grant would earn $9.3 million next season if he opted in, though sources say he could command up to $16 million this offseason.

“I’m definitely looking forward to it. We’ll see how it goes," said Grant, when asked about his offseason plans following the Nuggets' playoff exit.

The Nuggets will shed more than $44 million from their cap this offseason, with Paul Millsap and Mason Plumlee's contracts expiring.


Killian Hayes says he has known Knicks guard Frank Ntilikina for a long time and he has asked him about what it takes to stay in the NBA. Have heard that Hayes interviewed with the Knicks already before the lottery. He said today he Zoom'd with the Spurs and Wizards.


Killian Hayes says he has known Knicks guard Frank Ntilikina for a long time and he has asked him about what it takes to stay in the NBA. Have heard that Hayes interviewed with the Knicks already before the lottery. He said today he Zoom'd with the Spurs and Wizards.

LaMelo Ball says he has interviewed with the New York Knicks.

LaMelo Ball was asked if the New York Knicks have expressed interest in trading up to get him: "That, I don't know. Maybe, maybe not."