"Jazz free agent Carlos Boozer was bombarded with calls last night. The Jazz, Bulls, Heat, Nets and Knicks all made their calls. The Nets and Heat are considered the front runners for Boozer as far as teams with cap space go. But don't be surprised to see Boozer heading to a team like the Orlando Magic. The Jazz would like to re-sign Boozer. But if they can't, they'll actively pursue a sign-and-trade to get something back for Boozer.

The Magic have been offering Marcin Gortat, Brandon Bass, the expiring contract of Vince Carter to interested teams. The Jazz may also have interest in a sign-and-trade for J.J. Redick. They still need a shooter to replace Kyle Korver."

Carlos Boozer (photo. Jeff Salter)
After their season ended in disappointing fashion, Orlando Magic GM Otis Smith vowed that changes would be made, but also said he didn’t foresee a major roster overhaul. If today’s rumor that Carlos Boozer may be headed to Orlando is true, then change is certainly coming.

The proposed sign-and-trade for Boozer would have Orlando getting Boozer while giving the Jazz Vince Carter, Marcin Gortat and Brandon Bass.

I like this trade a lot for both teams, especially the Magic. Dwight Howard has never had a true power forward playing next to him. Most recently, Rashard Lewis has been in the PF slot for Orlando, but he plays more like a small forward. Boozer would complement Howard incredibly well as a true four, as he has the ability to hit mid-range jumpers and run the pick-and-pop that Howard doesn’t possess. Boozer is incredibly gifted offensively and while his defense is below average, Dwight can compensate for that. Also, by acquiring Boozer in this rumored deal, the Magic don’t give up essential pieces to their team. Carter and Lewis never really meshed together this season, and Carter’s disastrous playoff run caused quite a few grumblings in Orlando. Brandon Bass fell out of favor with Stan Van Gundy and didn’t play much in the playoffs, while Gortat has become expendable now that the Magic drafted Daniel Orton to be their backup center of the future.

For the Jazz this trade would also make a lot of sense. One of their big needs is at the center position as Mehmet Okur is getting old, and is very injury-prone. Gortat could provide insurance in case Okur gets injured again, and when Okur is healthy, Gortat is a significant upgrade at backup center over Kosta Koufos or Kyrylo Fesenko. While Carter played terribly in the playoffs, he is still capable of averaging 15-20 points per game, and while Wes Matthews is a nice story, he’s more suited to a backup role than a starting one if the Jazz re-sign him. The last piece the Jazz would get is Bass, who I believe would be a great fit on that team is a hard-nosed defensive presence off the bench behind Paul Millsap.

While this is only a rumor at this point, this trade makes a lot of sense for both sides involved. 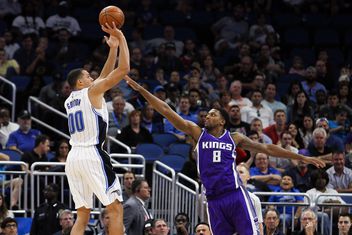