Until Thursday, the Wolves had only Jimmy Butler and Andrew Wiggins under contract as wing players. Thibodeau predicts the wingspan of both Okogie and Bates-Diop will give the Wolves two more players who can defend at least three positions — shooting guard and both forward spots — and switch off defending opponents on two-man pick-and-roll plays.

Offensively, each can play at least two positions on a team where even big man Karl-Anthony Towns gives the Wolves versatility.

“That’s the way of the league right now,” Thibodeau said. “You’re seeing a lot of different combination where there’s a point guard, three wings and a big. You’re also seeing two point guards together, two wings and one big. Of course, the versatility of KAT can open things up so you can use a slasher going to the rim. You can put pressure on the rim different ways. We’ll try to do that. Versatility is the big thing right now in our league.”

“Basically, he was saying glad to have you, we want you to work hard and you’ve got to be able to play defense and knock down shots,” Okogie said. “And I’m ready to do that.”

Thibodeau deemed each player an “accomplished” collegiate scorer, but acknowledged both must get stronger.

“Now this is a different level,” Thibodeau said. “But there are a lot of things they did well in terms of getting to the line, rebounding, scoring in different ways. The shooting component was important, too.”

How quickly Okogie and Bates-Diop adjust to that different level will determine if and how much each plays. Whether the Wolves can obtain a veteran free-agent wing, such as Avery Bradley, will play a factor, too.

“The biggest challenge when a young guy comes is learning how to be a pro and learning the pro game,” Thibodeau said. “The work this summer will be critical. Summer league is important, the fall is important, practices are important. Playing time is based on performance. You earn that. That’s not just something that is given to you.”

• Now that the draft is over, the Wolves are working to assemble their Vegas Summer League team. Murray State senior guard Jonathan Stark and Arkansas senior guard Jaylen Barford tweeted they will play on that team. So, too, will Bucknell senior center Nana Foulland.

They acted quickly this year, however, inking Jared Terrell of Rhode Island to a two-way deal the day after the NBA draft. He worked out twice for the Wolves in the pre-draft process, and they obviously liked him as shown by this early commitment.

Terrell is a somewhat undersized scoring guard, at 6’3” but with a strong 220 pound frame. He was a four year starter at Rhode Island, and was a major offensive force for the Rams from the beginning of his career.

He is 23 years old, and his shooting percentages from the free throw line and three point line got much better his senior year, when he shot 41 percent from three on 5.3 attempts per game, and 82 percent from the line on 4.1 attempts.

2. Defense seems to be his calling card as a prospect, but it rarely translates quickly from college to the NBA. What do you think his learning curve will be like defensively?

Most of us who had watched him for the past two years at Georgia Tech were surprised to see him measure in with a 7-foot wingspan, but length like that will be his best friend in the NBA. This is a guy who spent most of his college career matched up with the other team’s best player in what is arguably the best conference in college basketball.

He defended one through three at Tech and that type of versatility is unquestionably something that helped his draft stock rise; I think he’ll improve quickly in situations where he’s asked to guard a shooting guard or small forward, but the speed of an NBA point guard might be a wakeup call. As our basketball editor Rob Pensa has noted in the past, Okogie’s success to this point is a product of his unmatched work ethic. That’s going to serve him well in the league when it comes to adjusting to the caliber of player he’ll be going against and to the prevalent defensive switching in the NBA.

3. How would you describe his offensive profile?

Josh is as aggressive as they come on the offensive end. He has a nice midrange jumper that he only really tries when he’s wide open, but his main preference is to drive and attack every time. Rob points out that his finishing needs some work, particularly with the off-hand, but he gets to the basketball and draws fouls. There were instances where he had to alter his shot and go for a weird acrobatic finish instead of really going up strong in traffic, but he’s 19 and has plenty of room to grow.

The “3-and-D” label is popular around the NBA, but calling Okogie any variation of that is short-selling him as a player. He’s creative with the ball in his hands and is an incredibly underrated passer, the latter trait being something I haven’t heard anything about from draft reports. Our offense at Tech ran entirely through him for the better part of two seasons, largely because he knows how to find his guys in space and make the tight passes.

4. I noticed he took more 3s this season, but kept his efficiency. That’s a good sign. What does the eye test say about his improvement from deep?

One of the biggest knocks I’ve seen on Okogie is that his jump shot is slow-developing, but cry me a river. That never held him back against ACC opponents because his well-rounded offensive profile forced defenders to respect his driving ability just as much as his jump shot, and I expect that NBA teams will follow that same mantra by forcing Okogie to prove he can make shots at the NBA level and giving him more space early on. Tom Thibodeau may choose to retool some aspects of his shot, but there’s nothing to worry about.
As far as his three pointer is concerned, there was a very real improvement from year one to year two. That is especially impressive when you consider that he was a completely unknown commodity and commanded virtually no attention early in his career (until he dropped 38 on Tulane in his fifth college game, that is) but still managed to improve his shooting percentage as teams gave him more and more attention.

5. What’s something we might not know about Josh Okogie that we should?

Rob notes that Okogie is an exceptionally humble guy who makes everyone around him better with his selflessness, both on and off the court. He won a 2018 ACC Top Six for Service award for the great work he did with the Atlanta community, and you can expect him to continue his good work in Minnesota. I mentioned his worth ethic earlier, I just have to reemphasize how hard he works at everything he does. There’s a reason he went from fringe-draftee at the time he declared to a top-20 pick in four months.

Summer League starts July 6th for the Wolves. So far their roster looks something like:

Lucas
@dreightytwo
Egor Koulechov just announced via Twitter that he will be playing on the Wolves' summer league team. He's a 6'5" guard who played for Arizona State, Rice, and Florida over his college career. Shot 39.4% from three on 614 attempts in college.
Australian swingman Ryan Broekhoff has workouts scheduled with the Milwaukee Bucks, Minnesota Timberwolves and New Orleans Pelicans next week agent Andy Shiffman tells @hoopshype.

His mid-range game is superb, a skill that seems to be lost in today’s game. He can shoot over most defenders because of his long wingspan and hit at a very high percentage last season. He is also a very instinctive rebounder. He isn’t a great leaper, but he reads the ball off the rim well.

He missed the majority of the 2016-17 season with a stress fracture in his leg and while it didn’t seem to bother him last season, it could still be a concern for teams. He also showed fatigue at points throughout last season as Ohio State’s primary offensive threat, which is a red flag for many NBA teams as the professional schedule is much more demanding.

4. How would you describe his defensive ability and versatility?
Because of his wingspan and height, Keita is able to guard multiple positions on the floor. While he doesn’t have a great vertical, his long arms make him a solid shot-blocker and he will alter a number of shots with his length. NBA guards will be able to get past him 1-on-1, but he should be able to guard both forward spots with ease.
5. What’s the whole package like? If a couple injuries take place and Bates-Diop is asked to play 25 minutes per game, what should Wolves fans expect?
Offensively, Keita is an old-school type of player. His ball-handling is below-average for a small forward at the NBA level, but he excels on the block and can play with his back to the basket or hit a face-up jumper. He isn’t going to create much for others, but has a knack for making the right play and won’t force the issue much either. On the defensive end, his length is what makes him a weapon. He will alter shots with regularity. Stamina has been a concern for Bates-Diop in the past, but when he is out there, he doesn’t take many plays off. His effort, especially in big games last season, was unmistakable.

Look for the Tolliver $$ to fall between $5 and $6M on a 1 year deal. Thibs had 2 separate phone calls with him. Clippers, Dallas, Philly also had interest. Heck, Clippers visited him at his house. Good get for #Twolves. He makes 3s, and loves it here in MN. Great in community.

aught up with KAT, who is in Italy for an NBA event. Says he needed to get away, recharge. Says he’ll wait until he returns to address contract and Wolves situation: “We know there is a lot to talk about.”

One attribute that was clearly considered heavily this offseason when improving the bench? Wingspan. 7'0'', 7'2'', and 7'4'' for the 3 players added so far. Okogie, Tolliver, and KBD, respectively.

Jon Krawczynski
✔
@JonKrawczynski
· 43m
Anthony Tolliver saw the way the league was evolving and changed his game to go with it. Took 365 3s last year and knocked down 43.6 percent of them. 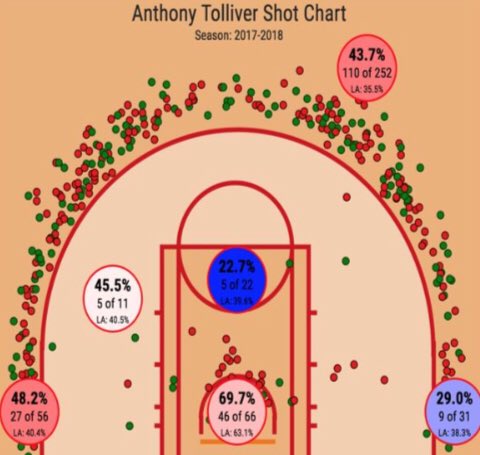 Kyrie Irving and Jimmy Butler are still trying to figure out a way to play together, according to a source.

The two were connected last offseason when both were on the trade block. Butler was traded to the Minnesota Timberwolves on draft night and Irving was moved to the Boston Celtics in August. Irving had interest in joining Butler with the Bulls.

A source says Butler has no interested in signing an extension this summer with the Wolves and is fed up with the nonchalant attitude of younger teammates, especially Karl-Anthony Towns.

Both Irving and Butler will be free agents in 2019.

According to Joe Cowley of the Chicago Sun-Times, Butler is "all but fed up with the nonchalant attitude of his younger teammates," specifically center Karl-Anthony Towns.

If anyone believes Joe Cowley is an agenda-free, objective reporter, then they are a lousy judge of character. Ignore the bullshit. Butler, Thibs, Towns, Wiggins are together for the 2018-19 season. Everyone knows the rubber meets the road a year from now. Many Q answered by then